Do not drive cars through flooded areas. The water depth and road condition may be unsafe. Additional information is available at https://water.weather.gov/ahps2/ Stay tuned for further updates by listening to NOAA weather radio... or your local radio and TV stations.

Disclaimer and Conditions of Use

This information is provided AS IS and strictly for recreational, educational, and informational purposes only; we disclaim liability of any kind whatsoever, including, without limitation, liability for quality, performance, merchantability and fitness for a particular purpose arising out of the use, or inability to use the data. The information may be inaccurate or incomplete based on how well the corresponding weather station successfully or unsuccessfully reported or recorded it with the instruments which measured the weather at the time; including gaps between hours or even days. Specifically, LocalConditions.com and this data, as presented, may not and should not be used as a reference for any reason relating to legal proceedings, insurance claims, recovery, loss prevention, making predictions, or critical decisions. Lastly, the weather station may be miles away from the actual area of interest. This data may not be leeched or republished. 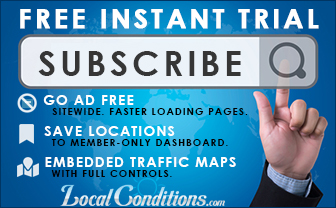